No other police dispatcher is as technological savvy as Tina "Mainframe" Cassidy, one of the most dependable members of C.O.P.S. who hails from Colorado Springs, Colorado. "Mainframe" ("Miss Sensor" in Brazilian version) is a rookie cop who moved to Empire City to serve the Empire City Police Department as a police dispatcher. Yet, she shows herself to be a highly gifted cybernetic programmer with technological knowledge that's second to none. An absolute genius, tomboyishly beautiful, an amateur violinist and an incredible sharp shooter. She one time paused from her violin playing to shoot her gun up and disarm Rock Krusher who was trying to use a welder to bring down a chandelier in The Case of the Crooked Contest.

She's never far from any tech machine including the computer terminal she normally uses in her daily police work and has no problems in using her professional high-tech wizardry to solve even the most critical and chaotic of cases. Because of this, Mainframe, hands down, became the most reliable member of the C.O.P.S. team. She is seen wearing a baseball cap, a blue and white vest, blue pants, blue earrings, and a yellow shirt. 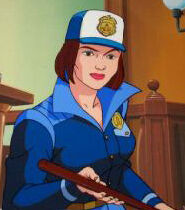 In the Shout! Factory DVD set, Disk 1, which one of the bonuses on it features sketches & concept artwork made for the show, has an image of a policewoman wielding a nightstick in her hand. She is the early, original prototype image of Mainframe created by Bart Sears who did the designs for most of the characters of the show before deciding later on to change her into the familiar computer whiz we know and love.

The comic version of Mainframe featured a much different version of her in appearance, including a different type of vest and hair design than what is seen in the cartoon. Mainframe is only seen exclusively in both the comics and the cartoon. She was never part of the toy series.

COPS File #00001. Mainframe and Hardtop both are the ones responsible for helping the C.O.P.S. team thwarting the first of Big Boss' criminal capers in The Case of C.O.P.S. File #1, where they helped the C.O.P.S. team put a stop to Big Boss' crimewave and ground the Ultimate Crime Machine Dr. BadVibes has built to pull off the biggest heist in the history of Empire City, even though both were supposed to stay put at the precinct.

Mainframe use her computer technology to hack into the large vessel and drain it of all of its energy, causing it to go out of control. Turbo Tu-Tone and Rock Krusher escaped the vessel only to get arrested by the C.O.P.S while Buzzbomb, who also escaped from the vessel, escapes arrest by hiding inside a dumpster. As a result of Mainframe's impressive high-tech performance and Hardtop's incredible driving skills, Bulletproof, warmly and graciously, welcomed both the two rookie officers into the C.O.P.S. team.

The Case of the Sinister Spa[]

COPS File #89724. In this episode both Mainframe and Mirage attended the grand opening of a luxurious spa. But it was run by Ms. Demeanor who capture the two C.O.P.S. and made them do janitorial work, including laundry. This doesn't stop Mainframe, along with Mirage, from using this opportunity to clean up the spa of crime and help the rest of her teammates free Mayor Davis from the mesmerizing fumes that trapped him inside the spa's steam room and send Ms. Demeanor to the cleaners -- which is prison.

The Case of the Criminal Mall[]

COPS File #68019. Mainframe often teams up with Bowser and Blitz on many occasions, including in this episode, The Case of The Criminal Mall where the three C.O.P.S. are sent to infiltrate the newly opened shopping mall, where Mr. Keen has designed an advanced theft-proof security system he claims will replace every security guard in Empire City. But the system failed to stop the three C.O.P.S. from getting into the mall with the help of Mainframe's alarm-proof device that blocks the alarm from going off as the C.O.P.S. team enters into the mall.

After a failed attempt to radio the team, The three C.O.P.S. raced to intercept BadVibes and Buzzbomb, who are chasing the brain that have managed to get away from the 2 crooks. At Bowser's command, Blitz went and fetch the brain just before the twp crooks crash into Berserko and Rock Krusher who was sent by Big Boss to help BadVibes steal the brain. Blitz raced back and gave the brain to Bowser, who then gave it to Mainframe, who went into the control room where she finds it a "piece of cake" ending the chaos by installing the brain back onto its base where it belong.

The Case of the Crooked Contest[]

COPS File #160057. Mainframe was asked by Bulletproof to go undercover as a contestant for a beauty contest which Nightshade & Ms. Demeanor also entered. Mainframe (with the help of LongArm & Mace) was there to investigate why the Big Boss wanted his two lady crooks to participate in the contest.

In The Case of the Crooked Contest she wears a skimpy pink bathing suit.

Community content is available under CC-BY-SA unless otherwise noted.
Advertisement