Officer Brooks served alongside P.J. O'Malley and is still a pretty untested rookie. He has the heart of a lion and amazing skills behind the wheel and this is what got the attention of B.P. Vess. Hardtop and Mainframe teamed up together and personally halted one of Big Boss' nefarious plans, and thus they were both invited to join the C.O.P.S. team. Hardtop strives to prove himself to his more battle-tested comrades, and succeeds on a regular basis.

Ironsides is his vehicle and he has a crush on ECTV news reporter Whitney Morgan.

Hardtop isn't often far from his Ironsides vehicle, one of the most potent attack vehicles in Empire City. He often wears his driving suit, even when not behind the wheel, and is usually getting tips from his partner, P.J. "Longarm" O'Malley. When he isn't with him, he and Mainframe can often be seen together as the two rookies on the force. 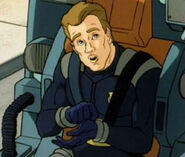 Add a photo to this gallery

Retrieved from "https://cops.fandom.com/wiki/Hardtop?oldid=4831"
Community content is available under CC-BY-SA unless otherwise noted.