Start a Wiki
Brandon "The Big Boss" Babel is Empire City's worst nightmare. The mastermind behind the entire CROOKS organization made up of only professional burglars, muggers, and thieves. A ruthless crime lord who rules the criminal world with an iron fist-- literally. A freak accident caused him to lose his left hand. It was replaced with a cybernetic left hand which he uses to smash things when enraged. He talks like Edward G. Robinson, nearly always uttering a soft spoken 'mahh' as he speaks to himself, his thugs, foes, or anyone else. Surprisingly fast and agile despite being a grossly obese 350 pound man, Big Boss makes sure that no criminal caper goes on without him knowing about it and giving his approval.

Big Boss is never without Scratch who is Big Boss' pet weasel with large eyes and a cat-like look. He keeps him company everywhere he goes at all time. Like Big Boss, a freak accident caused him to be severely injured, leading him to have a cybernetic body and metal paws to help save his life. He's easily startled and jumps when the Big Boss' iron fist pounds on the desk right next to him to make the boss' point across. One time he's seen with a jet pack placed on him in The Case of the Prison Break-in by Big Boss who sent him to deliver the de-controller to Rock Krusher who plans to use it to imprison the prison guards and take over Graystone Prison.

Although a ruthless crime lord, Big Boss is morally opposed to drugs, as referenced in The Case of the Lowest Crime. After Buttons McBoomBoom brings Addictem to Big Boss' headquarters, Big Boss promptly turns down any business relationship with him, with the reasoning that "Drugs kill."

The toy and comic adaptations both depict Big Boss in much different appearance. Big Boss has a much flatter head, longer mouth, slightly different hairdo, a blue shirt underneath his white suit, and lacks a pot belly on his torso. His pet weasel Scratch has spines on his back and a more realistic weasel look. In the toy series as well as once in the episode The Case of C.O.P.S. File #1, Big Boss is seen carrying a strange cane he uses as a rifle weapon. In the comic series, Big Boss has a personal grudge against Bulletproof for sending his twin brother, the Crime Boss of New York City, to prison where later died in confinement - thus leading his bumbling nephew Berserko (his brother's son in the comics) to wind up up under his care, much to Big Boss's constant annoyance.

The Case of The Spotless KingpinEdit

One of Big Boss' major pet peeves is getting his suit dirty. In this episode, Big Boss, fed up with getting stains splattered all over his favorite suit, orders a new stain resistant suit made to completely resist dirt. But, when Bowser, Blitz, and Highway came to take down Berserko, Rock Krusher, and Squeeky Kleen for stealing chemicals from an experimental laboratory, Berserko witlessly threw the suit at the COPS causing the chemicals inside the suit stolen to get screwed up, causing the suit to act as a big magnet, attracting all the dirt from the sofa, from the floor, from the desk, to HIM!

Big Boss becomes very enraged and ordered his crooks to fix up a formula that could reverse the effects of the ill-fated suit and get the dirt off of him. Squeeky has Dr. Badvibes make out the formula hoping that would cure him of this dirty predicament. Later, Squeeky was able to escape from the C.O.P.S. and raced back to Big Boss at his penthouse with the formula and, at his order, splashed the formula on him. The viewer then saw the dirt get dissolved away - and the suit too, revealing Big Boss' pig trousers, a white sweatshirt, and one angry Big Boss chasing after poor, skinny Squeeky Kleen.

The Case of The Visiting MotherEdit

Big Momma paid her son, Big Boss a visit in Empire City to accompany him to an auction brought on by Commissioner Highwaters to raise money for charity. The auction is selling items Big Boss wanted his crooks to steal. But Big Boss had to struggle to be good and generous in front of his momma while hiding his real agenda, even though it was pretty difficult thing to do for a kingpin such as The Big Boss. He even had to hide his true colors from her by pretending to run an orphanage at an abandoned warehouse with his crooks posing as "orphans."

The Case of The Crime ConventionEdit

Big Boss is a very greedy, selfish man who took all the glory for himself in this episode when he awarded the Crook of the Year Trophy to himself after Buttons McBoomBoom and Berserko duked it out with each other to see who should be voted Crook of the Year.

The Case of The Super ShakedownEdit

Big Boss wishes to make all of Empire City his own and will do whatever it takes to do it, whether that is taking the President of the United States hostage in The Case of The Big Boss' Master Plan or, in this episode, using The Ground Shaker to level the city to the ground, destroying it, unless all of his demands are met. But thanks to the C.O.P.S., the machine is destroyed, Empire City is on solid ground once again, and Big Boss' penthouse is flooded with Big Boss and Squeeky Kleen inside trying to make a getaway before the now non-existent earthquake, hits the city.

Sometimes Big Boss likes to take advantage of the city's problems and uses it to his own advantage. In this episode, Empire City has lots of financial troubles and Mayor Davis has declared that all unnecessary employment in Empire City must be eliminated. Bulletproof had to assure the C.O.P.S team that the C.O.P.S. organization is not one of those unnecessary employment areas. However, Big Boss made C.O.P.S. to be one of them by faking retirement and took off to a tropical island hideaway, anticipating the C.O.P.S. to be given the pink slip. Afterwards, Big Boss returns to pull a heist on the Empire Central Railroad train that's coming to Empire City to deliver relief funds to the city, which was successfully thwarted by Bulletproof, Mainframe, and Mace, who all got their jobs back afterwards.

The Case of the Lowest CrimeEdit

For all of his faults, Big Boss does have one good point: his zero tolerance of illegal drugs. He refuses to deal in them and has used his influences to keep them out of Empire City (although the legal authorities are unaware of this.). When a shady criminal called Addictem came to ask to join Big Boss's crooked empire to help further his drug selling business, Big Boss angrily smashes the sample product with his iron hand and tells Addictem flat out that he's not welcome. Later, during a heist, Berserko accidentally falls into a crate full of Addictem's Crystal Twyst, some of which absorbs into his body and leaves him in a coma. Berserko is rushed to the hospital by his fellow crooks just in time, and declared "lucky to be alive". Big Boss is genuinely saddened by his nephew's condition, but the doctor points out that at least Berserko wasn't stupid enough to take drugs for fun, like Addictem's other victims. Determined to get Addictem out of Empire City for good, Big Boss and the other crooks go to the 647th precinct and, to everyone's amazement, offer their assistance to the C.O.P.S! With only slight reluctance, Bulletproof agrees that they should work together to bring down their mutual enemy. The chase is on, with LongArm teaming up with Rock Krusher, Sundown with Turbo Tu-Tone, Mace with Buttons McBoomBoom, Bullseye with Nightshade, and Blitz with Buzzbomb, with Bulletproof and Big Boss supervising the operation at the computer terminal. Thanks to their teamwork, Addictem is eventually chased into the hospital where Berserko, having made a successful recovery from his drug overdose, nabs him from behind. The drug lord is finally caught and sentenced to life in prison - and before he even enters his cell, Big Boss' gang are back to committing their own crimes.

As was common with cartoons of the 1980s, each of the COPS episodes ended with an educational epilogue segment entitled C.O.P.S. for Kids, where a Crime Prevention or Safety tip is given by one of the characters of the show. In an unusual move, one of these segments was hosted by Big Boss, who along with Squeeky, discussed the danger of flashing your money around. This is unusual as villainous characters are normally restricted from this duty in a children's show unless they are cast in the role of the "bad example". 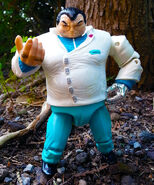 Big Boss's action figure
Add a photo to this gallery
Retrieved from "https://cops.fandom.com/wiki/Big_Boss?oldid=4861"
Community content is available under CC-BY-SA unless otherwise noted.