Start a Wiki
Addictem is an evil drug dealer and one-time-only character in C.O.P.S.

Addictem is a very shady character with gray skin, sharp fingernails, reddish eye, and white hair with a lock covering his right eye. However, he is not an average criminal. Addictem is a drug lord who, with the help of his two criminal henchmen, goes about selling a strange addicting product called Crystal Twyst, which is a drug product that resembles a green, glowing badge. When used, the user puts it onto his/her forehead and it's instantly dissolved inside the forehead, causing the user to have violent fits. A major overdose of this can cause a person to fall into a coma and lay near death which Berserko sadly experienced in The Case of The Lowest Crime.

Addictem is seen in only one episode.

The Case of the Lowest CrimeEdit

As Addictem sold another Crystal Twyst product to a buyer roaming the street, Buttons McBoomBoom made an unsuccessful attempt at committing another store robbery; the cash register is empty of its money contents from previous robberies made by those who did it to purchase more Crystal Twyst for themselves, so Buttons leaves the store only to have a run-in with Addictem who offers to sell him the Crystal Twyst, but Buttons rejected his offer, preferring to get his kicks from crime. Instead, Addictem requested to go see Big Boss about joining his criminal group in order to promote the product. Buttons took him to see Big Boss, but when Big Boss sees the product, he smashes it with his iron hand and told Addictem flat out that he's not welcome in his criminal empire and that he and his organization will not tolerate any endorsement of illegal drugs ever. So, Big Boss orders Buttons to throw him out.

Later, Berserko, Buttons, and Rock Krusher heads to the storage dock where a large blimp is importing a priceless gold statue from South America to Empire City. Big Boss wanted the crooks to steal the statue. So Berserko, Buttons, and Rock Krusher head to the dock and dispatches the guards with sleeping gas. Then, they climbed up a stack of crates to steal the statue inside the top crate, unaware that Addictem and his two henchmen has come by to pick up a cache of Crystal Twyst they secretly smuggled into Empire City along with the statue. But they hadn't count on Berserko making a slip-up and fall right into the crate full of Crystal Twist that absorbs right into his body, forcing him into a coma. Berserko is rushed into the hospital where Big Boss and his own henchmen arrived to see how Berserko is doing and the results are not good. Big Boss, upset over the matter, is shown by the hospital nurse to another person lying ill in bed, also heavily affected by Addictem's drug product. This prompted Big Boss to get his crooks and himself involve—of all things—with the C.O.P.S., who with little reluctance, agree to team up to catch Addictem and end his drug selling days for good.

The chase was on with Blitz teaming up with Buzzbomb, Rock Krusher with LongArm, Buttons with Mace and Nightshade with Bullseye, and Bulletproof and Big Boss at the terminal urging the two teams on. Addictem is chased into the hospital where he was caught by Blitz who grabbed him by the arm. LongArm and Rock Krusher caught up with Addictem. LongArm points his gun at Addictem, but Addictem grabs the hospital nurse and attempts to use her as a human shield causing LongArm to lower his weapon. Then Berserko, who made a successful recovery from his accidental drug overdose, emerges to nab Addictem from behind, forcing him to let her go. Thus, the drug lord is finally caught, placed under arrest, and gets sent to the 647th precinct, where Mainframe delivers a report of another crime being in progress. This time committed by the usual crooked bunch who returned back to their thieving ways right after Addictem is caught. In addition, Addictem was sentenced to life in prison. 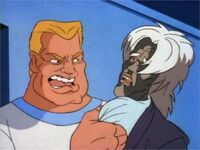 His name is a pun on the term "Addict them", and has an unrelenting obsession with anything including drugs and gambling.

Retrieved from "https://cops.fandom.com/wiki/Addictem?oldid=4849"
Community content is available under CC-BY-SA unless otherwise noted.